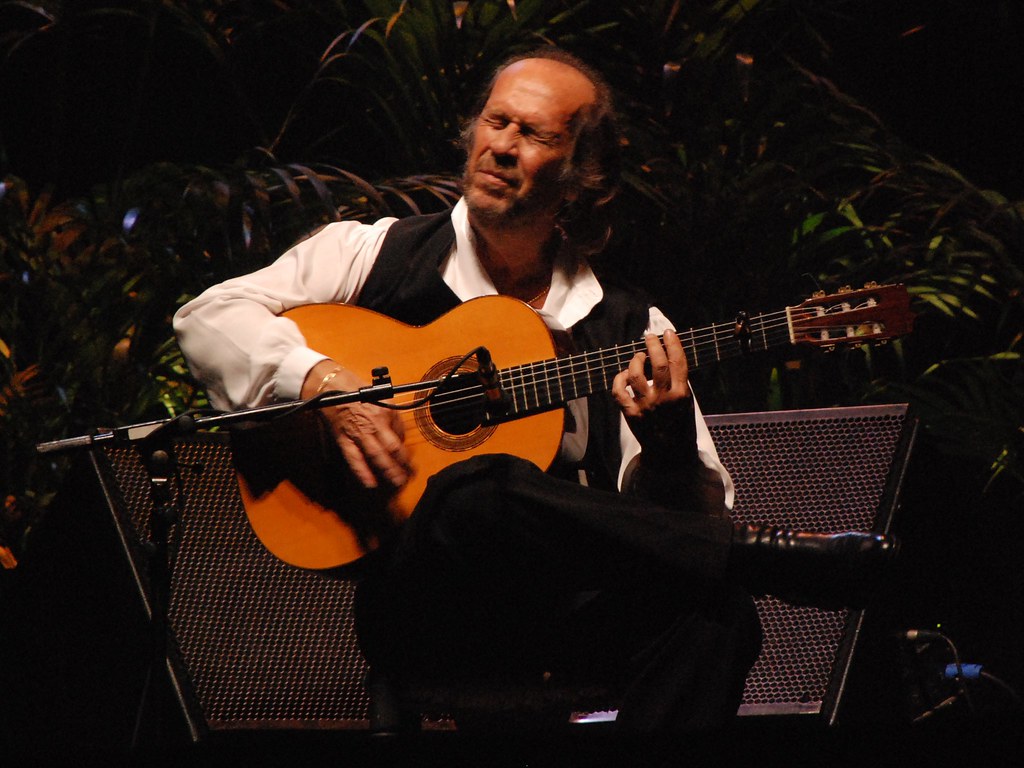 Initially, flamenco guitar music was just used as part of the rhythm given to the cantaor and the bailaor. Both were the main characters of the performance and the music was secondary.

However, as the cafés cantantes became more and more popular during the 19th century, flamenco guitarists (tocaores) started to be considered indispensable. As time went by and artists’ professionalism rose, guitarists performed solo as well, proving to the audience that musicians could also be virtuosos in the flamenco world.

What’s the Difference Between Classical and Flamenco Guitar?

A flamenco guitar typically has a thinner top and less internal bracing than a classical guitar. It also features what is known as a tap plate, similar to a pickguard, which protects the guitar body from the rhythmic finger taps of the player.

A Flamenco guitar has a higher pitch. Therefore it’s usually played using a cejilla (capo) – a device that clamps down across the fingerboard at a particular fret on a guitar. This helps to raise the pitch of a guitar, making its sound sharper. It also allows to change the key of the guitar to match the singer’s vocal range

Remember that Flamenco is all about improvisation and tradition. So traditional flamenco music is rarely written down. Instead, it is passed down from generation to generation.

The Particularities Of Playing A Flamenco Guitar

Obviously, an instrument with such peculiar specificities has to be played following different techniques.

Flamenco guitar is played differently from classic guitar in everything from the strumming to the guitarist’s posture.

Flamenco guitarists hold their instruments differently than classical guitarists. Rather than supporting the guitar on the right leg and at an incline, they usually cross their legs and place the neck of the guitar parallel to the floor. This position allows for better leverage of the instrument, and eases the player’s ability to switch quickly between different palos.

The way of playing it also includes a mixture of different percussive and rhythmic techniques. It is common for eighth note triplets to be mixed with sixteenth note runs in a single bar. Finger taps (golpes) are common, as is traditional strumming.

Therefore, the guitarist or tocaor (from the Spanish verb tocar, meaning to touch or to play) combines techniques from the classical school, flamenco unique patterns and, finally, improvisation.

In order to acquire these techniques and to develop the art of improvisation, the guitarist spends endless hours learning routines, practicing and listening to others. It’s the only way to follow the cantaor – who’s the real leader of the cuadro, with the same spontaneity, instinct and ability than the cantaor‘s one.

Nowadays, flamenco guitar music can be combined with other music resources: clapping hands, the cajón and the castañuelas. Nevertheless, a long time ago the espectáculos flamencos were performed without a guitar or any other instrument. The cantaores were the soul, music and words of the show.

Actually, this is not surprising if you take into account that the aim of flamenco is to express the deepest emotions. Hence, flamenco guitar music must follow the spirit and emotions while interpreting and convening such feelings.

There are confronted opinions on what is the most important element of flamenco. While some experts claim that the songs, and most particularly the lyrics, are essential, others affirm that without the introduction of the guitar, flamenco would be just too arid and harsh.

Again, flamenco is all about emotions, most of the time related to drama, uncorresponded love and even death. As a consequence, the way a cantaor interprets his role and conveys the song’s message is crucial. On the other hand, the guitar notes softens the heartbreaking cries of the cantaor and balances the musical composition.

After attending to a handful of flamenco art shows with foreign friends, most of them concluded that the cantaor‘s singing is very dramatic and that they were glad to listen to some great flamenco guitar music at the same time. I often ask them, especially when it’s their first time, if it is because they didn’t like it. The answer is invariably the same: “Not at all. I just wish I could understand what they sing!“.

A full flamenco experience involves feeling the music, the dance and the lyrics. Nevertheless, I have to warn you: it’s extremely difficult to understand cantaores. Their accent, pronunciation and vocabulary is very peculiar. Even I have a hard time trying to catch the whole thing!

So don’t give up, concentrate on the music and let it flow. The moment you shake and notice the spectacle is giving you goosebumps, you are perceiving the duende. That’s exactly what flamenco performers want you to feel.

If you do, they’ve succeeded. If not… well, maybe next time.