How to celebrate Three King’s Day in Madrid 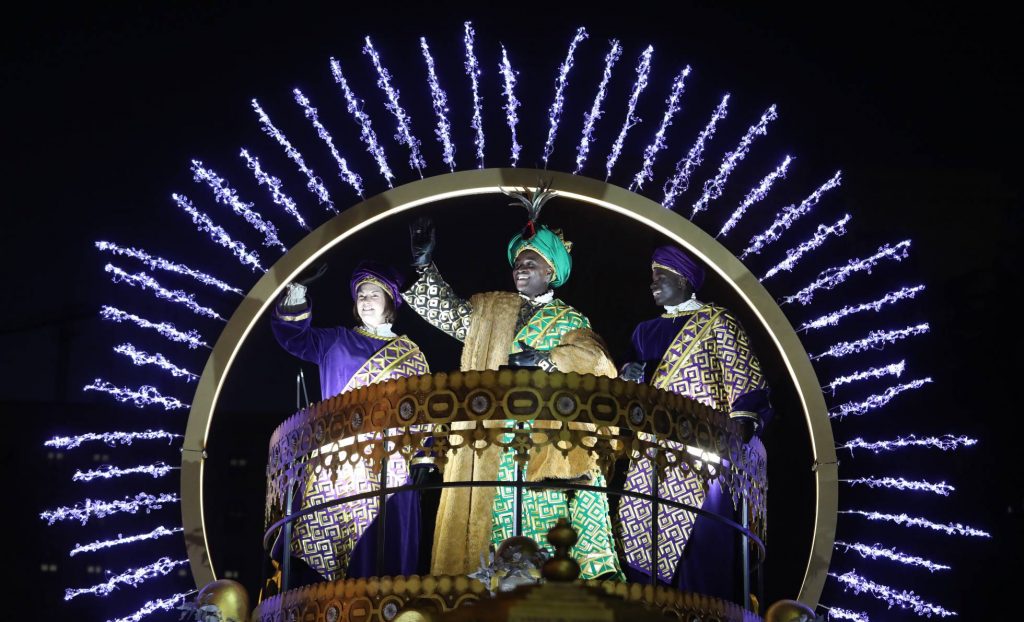 Celebrations vary throughout the country, but here’s how to celebrate Three King’s Day in Madrid!

Traditionally speaking, children don’t receive their Christmas gifts until the 6th of January (Day of the Epiphany), when The Three Kings (Los Reyes Magos) travel all over the country delivering presents. Nowadays, more and more families in Spain are welcoming Santa Claus to their houses and starting to exchange gifts on Christmas Day.

Go to the parade on Three King’s Day in Madrid

Spanish people love a good procession, and the central part of the Three King’s celebration in Madrid, and most other parts of Spain, is the huge parade that winds through the streets of the city on the 5th of January.

Los Reyes Magos announce their arrival by means of a 3.5-hour long journey through Madrid known as La Cabalgata de Los Reyes. This symbolizes the arrival of The Three Kings, Melchior, Caspar and Balthazar, to Jesus’ manger to present him with their gifts of gold, frankincense and myrrh.

But the Three Wise Kings are not be alone: there are more than 2,000 people such as acrobats, musicians and dancers livening up this great celebration.

How is the Cabalgata de los Reyes Magos

Some cities, such as Barcelona, welcome their guests of honor by boat, but here in Madrid, Los Reyes Magos arrive on huge floats. They’re accompanied by smiling locals, armed with unending bags of sweets to throw into the crowd.

Locals gather in huge numbers to see the parade and collect as many candies as possible. Be prepared to see people of all ages, both young and, shall we say, ‘not so young’, scrambling through the crowd adding to their candy harvest. Some even use upturned umbrellas to catch as many as possible!

So if you come with small children, make sure to bring a plastic shopping bag to fill with candy.

While this lively celebration is certainly not for the faint-hearten, with dancers, musicians and all types of performers adding to the spectacle, seeing the Cabalgata de Los Reyes is something you can’t miss if you’re in Madrid in January!

There are several Cabalgatas in Madrid

There will also be other Cabalgatas de los Reyes Magos parades organized by other districts in Madrid. These alternative parades are a good option if you would like to watch a Cabalgata, but you don’t want to stand among a large crowd for too long.

Here are some of them:

Time to go to sleep!

When all the excitement of the cabalgata has died down, families return home and prepare themselves for the arrival of The Three Kings. Children place a pair of shoes in an obvious spot in the house where the Kings can clearly see them.

Much like how a drink and some festive treats are left for Santa Claus, food and drink are set out for the Kings too. And instead of Rudolph’s carrot, some families leave milk and bread to help the camels complete their epic journey through Spain.

Kids finally settle down to a restless night’s sleep and when they just can’t bear the anticipation anymore, they rush to the spot where they left out their shoes to find the neatly wrapped presents from the Kings waiting for them!

The 6th of January, Día de Los Reyes, would not be complete without the traditional breakfast of Roscón de Reyes. After unwrapping all the presents, the whole family gathers round to tuck into this circular cake filled with delicious cream and decorated with brightly colored candied fruit. The candied fruit, or fruta escarchada, is said to represent the jewels that were found on the Wise Men’s clothing when they arrived to Bethlehem.

However, there’s much more to this tradition than just enjoying the taste of the delicious roscón. Carefully hidden inside are two figurines, a faba bean and a king. The person who gets the slice with the small king inside it is the king or the queen of the breakfast and is said to have good luck all year round.

Unfortunately, it’s not such great news for the person who finds the faba bean, as they have to pay for the roscón! These delicious treats are found in pastry shops all throughout the city and devouring your roscón with a nice cup of coffee is the perfect way to celebrate Three King’s Day in Madrid.