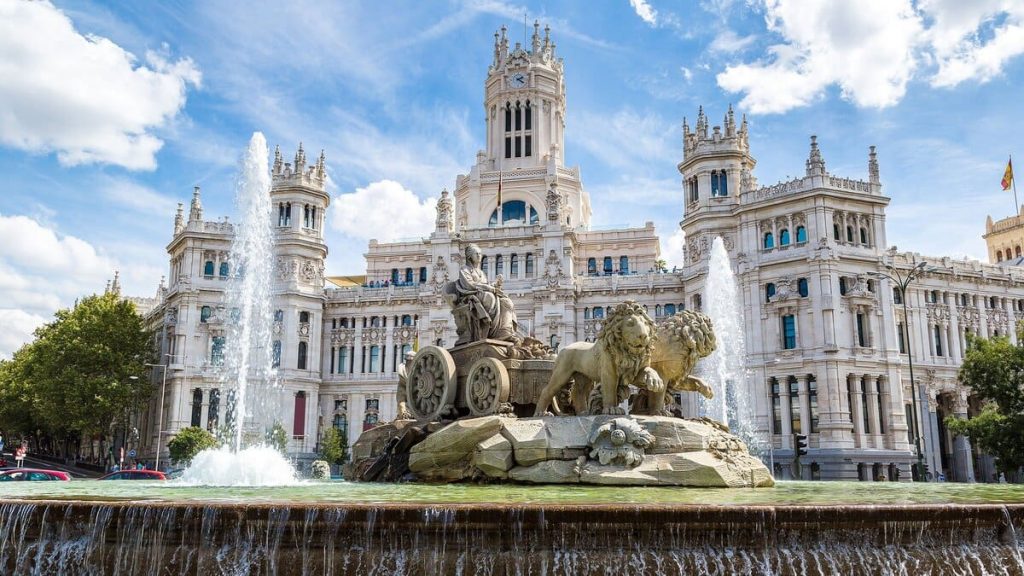 Plaza de Cibeles, or Cibeles Square, is a famous square and a landmark in the heart of Madrid. A Neoclassical fountain and statues and sculptures made of marble have been placed in the center of the square and, together with the Palacio de Cibeles, have become an important symbol of the city.

The origins of Plaza de Cibeles

The Plaza de Cibeles is a square with a Neoclassical complex of marble sculptures with fountains that has become an iconic symbol for Madrid. Plaza de Cibeles was originally named Plaza de Madrid, but in 1900, the City Council named it Plaza de Castelar, which was eventually replaced by its current name.

At the center stands the Fuente de Cibeles named after Cybele, a Phrygian goddess who had a significant cult in Rome, and is seen as one of Madrid’s most important symbols. The fountain
depicts the goddess, sitting on a chariot pulled by two lions. It was built in the reign of Carlos III and designed by Ventura Rodríguez between 1777 and 1782.

The fountain of Cybele has been adopted by the football club Real Madrid, whose fans use the area to celebrate its triumphs.

The buildings on Plaza de Cibeles

The most prominent of the buildings at the Plaza de Cibeles is the Palacio de Cibeles (formerly named Palacio de las Comunicaciones and now known as CentroCentro). The cathedral-like
landmark was built in 1909 by architects Antonio Palacios and Joaquín Otamendi as the headquarters of the postal service. This impressive building was home to the Postal and Telegraphic Museum until 2007 when the landmark building became the Ayuntamiento de Madrid (Madrid City Hall).

At the opposite end of the Bank of Spain is the Palacio de Linares. The Baroque palace was built in 1873 by a rich banker, José de Murga. By the late 1970s the building had
fallen into disrepair but was completely renovated in 1992. It currently houses the Casa de América, a cultural center and art gallery focused mostly on Latin American arts.

The Palacio de Buenavista, headquarters of the Spanish Army, faces the Palacio de Cibeles. Its construction in 1777 was financed by the Duquesa de Alba. It is the only building of the square surrounded by a French style garden, designed by architect Ventura Rodríguez. The Crown owned it after the death of the Duquesa de Alba, and became the War Ministry in 1847 until 1939 when it was handed to the Spanish Army.

Plaza de Cibeles is in the center of Madrid, at the intersection of Calle Alcalá, Paseo del Prado and Paseo de Recoletos.

You can see the Mercado de San Miguel if you follow walks 2 or 5 of my ‘Madrid In 9 Walks’ guide.