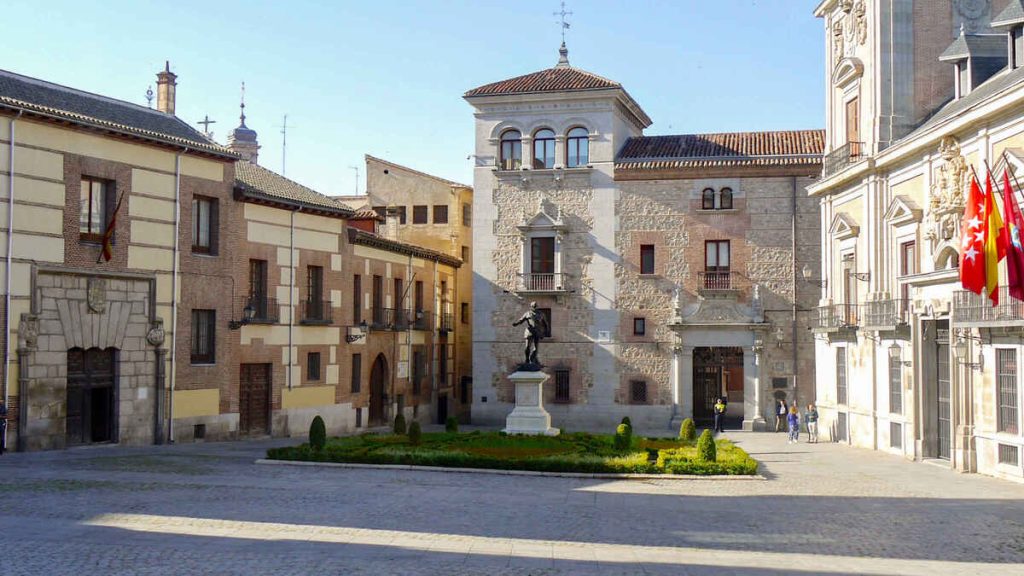 The Plaza de la Villa is one of the most important squares in Madrid de los Austrias – the historical center of Madrid. It is a medieval square where some of the oldest buildings in Madrid are located: the Casa and Torre de los Lujanes, the Casa de la Villa and the Casa Cisneros.

The origins of the Plaza de la Villa

The largest building at the square served as both prison and Town Hall or Casa de la Villa (ayuntamiento). The two entrances go back to the time when it had this dual function. It was the permanent seat of Madrid’s city government from the Middle Ages until recent years when Madrid’s City Council relocated to the grand CentroCentro on Plaza de Cibeles.

Opposite stands the Casa and Torre de los Lujanes. The tower is the oldest structure, dating from the early 15th century, while the house dates from the late 15th century. Both were constructed in the Mudéjar style, a strongly Muslim-influenced style of architecture of the 12th century.

Next to the Casa de la Villa, and connected through a rear passageway, is the Casa de Cisneros, with a Plateresque decorative frontage design. This is a style derived from the late Gothic period
of Castile, and the example at Casa de Cisneros is almost unique in Madrid. It was was built in 1537 by Benito Jiménez de Cisneros, a 16th-century architect and nephew of Cardinal Cisneros, the man who founded the University of Alcalá de Henares.

At the center of the square is a statue of Álvaro de Bazán, commander of the ill-fated Spanish Armada, known as the Invincible Armada in Spain, that attempted to overrun England in 1588.

If you like sweets, the El Jardín del Convento store on Calle Cordón, 1, very close to Plaza de la Villa sells delicacies made by nuns from different convents throughout Spain.

Plaza de la Villa is very close to important sights of the capital, such as Plaza Mayor, Mercado de San Miguel or La Almudena Cathedral, in the heart of Madrid.

The nearest subway station is Sol on lines 1 (light blue), 2 (red) and 3 (yellow). It is also connected to the Renfe Cercanías Madrid network.

You can stroll around Plaza de la Villa if you follow walk 1 of my ‘Madrid In 9 Walks’ guide.