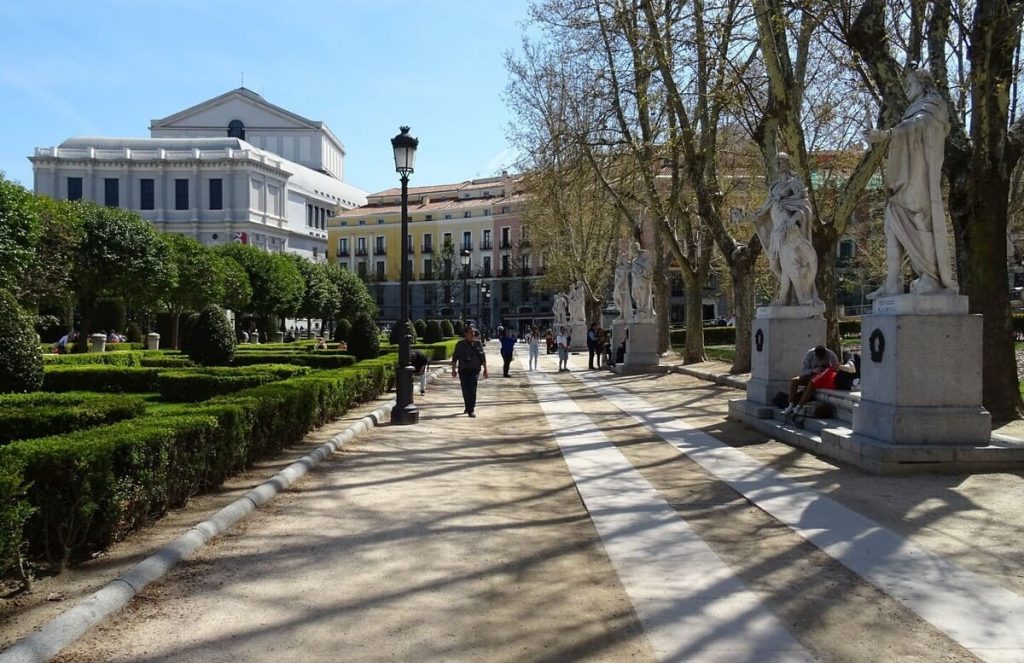 The Plaza de Oriente is a pedestrianized square bordering Madrid’s Palacio Real. The square was laid out in the mid-19th century and is adorned with small gardens and many statues.

The origins of the Plaza de Oriente

The Plaza de Oriente lies on the east side of the Palacio Real (Royal Palace), hence its name. This square is a haven of peace and tranquillity.

During his short reign as king José I, Joseph Bonaparte (Emperor Napoleon’s brother) launched a project to open up the east side of the Royal Palace with the creation of a new square and a long boulevard which would lead straight to Plaza de Cibeles. Several buildings were demolished in the process, including the royal library, churches and residential buildings.

After the French were ousted, the plans for the boulevard were put aside but king Fernando VII pressed on with the development of the square and launched the idea of building a theater on the eastern side of the square, the Teatro Real (Royal Theater).

Taking center stage is a huge statue of king Felipe IV astride a horse that was modeled from an art piece by Velázquez. The statue was created in the 1639 by the Italian sculptor Pietro Tacca. It was the first successful attempt at creating a statue with a prancing horse. Galileo was responsible for the calculations of the stability and suggested to Petro Tacca to make the rear section of the horse in massive bronze and the rest hollow in order to prevent it from falling over.

The statue was installed in the gardens of the Buen Retiro Palace, today known as the Parque del Retiro. In 1843 it was moved to the center of the Plaza de Oriente and placed on a large fountain decorated with statues of lions and allegorical figures.

The landscaped gardens are enclosed in a kind of semi-circular design with broad walkways, one of which is lined with 44 statues of Spanish kings from the medieval period. They range from
the Gothic period up to the time when the country was reunified following the defeat of the Moors in the 15th century. These statues were meant to be placed on top of the Royal Palace’s balustrade. king Carlos III however refused this, arguing that the statues would be too heavy and could easily fall off the roof.

Avoid the tourist traps at the Plaza de Oriente!

There are many cafés that line the area. Perhaps the most famous one being the Café de Oriente, which has a marvelous terrace to sit outside and enjoy the spectacular views of the square. Unfortunately, its prices are not particularly cheap.

Plaza de Oriente is between the Palacio Real and the Teatro Real.

The nearest subway station is the Opera, located behind the Teatro Real, on lines 2 (red) and 5 (green).

You can stroll around Plaza de Oriente if you follow walk 1 of my ‘Madrid In 9 Walks’ guide.