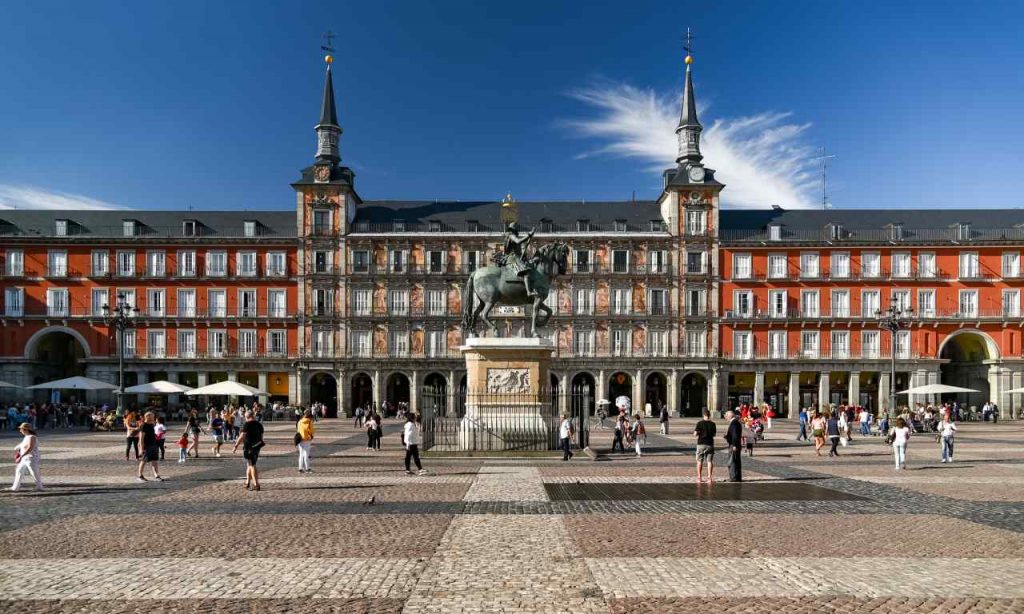 Dating back to the 17th century, Plaza Mayor is the cobble-stoned heart of Madrid and the main point of reference for many of the city’s residents and visitors. Wander your way down the narrow streets that lead off the square and you will find all sorts of colorful shops and boutiques, many housed in ancient ateliers and workshops.

The origins of Plaza Mayor

Originally called Plaza del Arrabal, the Plaza Mayor was built during Felipe III’s reign (1598-1621) and is a central plaza in Madrid. Rectangular in shape, it is surrounded by three-story residential
buildings having 237 balconies facing the square.

During the middle ages the site was just a large marketplace that the Moorish Arabs set up just outside the old city walls. In the 1560s, Felipe II asked Juan de Herrera, architect of the Monasterio del Escorial, to turn the market place into a real square. He envisaged a grand design where merchants could feel their importance and where business could be conducted properly. It was not until 1617 that the construction started.

The initial project was a large square, surrounded by wooden buildings up to six stories high. Unfortunately, a series of huge fires destroyed everything not once or twice but three times in history (1631, 1672 and 1790). What you can see today is the result of the last reconstruction, a design by Juan de Villanueva.

The Plaza Mayor has been the scene of mass events: markets, bullfights, soccer games, public executions, and, during the Spanish Inquisition, autos de fé (acts of faith) against supposed heretics and the executions of those condemned to death.

If there is a building that will capture your attention in the Plaza Mayor, it is undoubtedly the Casa de la Panadería (Bakery House). This beautiful building was constructed in the early 17th
century, although it underwent through numerous changes like the rest of the square, especially after the huge three fires mentioned before.

The frescoes that decorate the façade were added in 1670. Sadly, the original ones were destroyed and had to be restored on many occasions, the last one being in 2015.

Since its opening, the Casa de la Panadería housed the offices of the Baker’s Guild, one of the most influential in the country. This organization held a lot of power, being able to control the price of grain, not only in Madrid but nationwide as well. This gave them great political and economic power, influence and importance. The building has two Flemish style towers and spires, and stands at the north end of the square.

On the opposite side of the Plaza Mayor is a similar building that also has two towers and spires. This is the Casa de la Carnicería, once the butchers’ shop.

Flemish sculptor Giambologna’s equestrian statue of Felipe III dates from 1616, but it was not placed in the center of the square until 1848 when it was moved from the Casa de Campo. Around the same time, the plaza was redesigned with gardens, but those were removed in 1936.

What is so special about Plaza Mayor?

Plaza Mayor hosts all sorts of markets and fairs, but the most famous is the weekly ‘stamp and coin market’, which takes over the plaza every Sunday morning. Whether you are an avid collector or not, I am sure you will find something special to remind you of your time in Madrid.

Oh! In addition to this, every December the Plaza Mayor springs to life for the annual Christmas Market, a cherished tradition since 1860.

Be careful when visiting Plaza Mayor

The Plaza Mayor is very lively, any time during the day and also at night. Be particularly careful as there could be pickpockets in the area. Take special care of your personal belongings and read some advice on street safety in Madrid.

Plaza Mayor is very close to important sights of the capital, such as Plaza de la Villa, Mercado de San Miguel or La Almudena Cathedral, in the heart of Madrid.

You can stroll around Plaza de la Villa if you follow walk 1 of my ‘Madrid In 9 Walks’ guide.