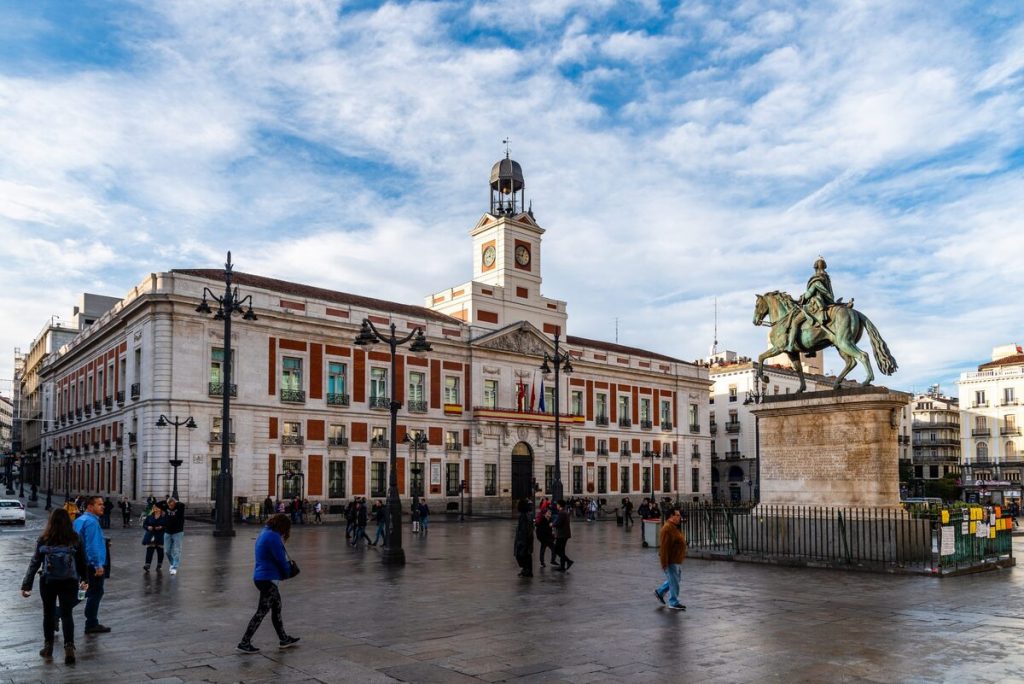 The Puerta del Sol is a bustling, reverberating, and full of life square in the midst of Madrid. Its official name is actually Plaza de la Puerta del Sol, but locals simply know it as Sol.

Whether you’re a backpacker, a first-time traveller, or a high-flying businessman-jetsetter en route to Madrid you will walk around Puerta del Sol. It is inevitable.

The origins of the Puerta del Sol

The Plaza Puerta del Sol is the perfect starting point to explore Madrid. This bustling, centrally located square is one of the city’s most lively places. The plaza’s name, ‘Sun Gate’, originates from the eastern city gate located here in the 15th century.

The El Oso y el Madroño statue is in the eastern part of the square. It represents a large bear in stone and bronze that rises toward a strawberry tree to eat the fruit while placing his paws on the trunk. This scene has been the symbol of Madrid since it was first inserted into the city’s shield in the 13th century.

In the middle of the square there is a large equestrian statue of Carlos III, one of the most influential leaders in Spanish history. He was the King of Spain and the Spanish Indies from 1759 to 1788, and known for implementing a series of urban improvements in Madrid.

The king looks out on to an 18th-century red brick building, the Casa de Correos (literally, the Post Office). Built between 1766 and 1768, it houses today the regional government of the Comunidad de Madrid. It also contains the famous clock whose bells mark the traditional eating of the twelve grapes on New Year’s Eve. In front of it, on the pavement, lies the ‘kilometer 0’ plaque, marking the center of the Spanish road network.

Right on the west edge of Plaza Puerta del Sol, La Mallorquina has been opened since 1894 and sells a range of tasty delicacies of both sweet and savory options. Step in and be prepared for a busy, bustling place with helpful staff – it is frequented more by locals than tourists, with good reason.

This is a great spot for pastry lovers and a nice pit stop for something sweet during your walk. Just a glance at the windows will be a feast for your eyes!

Puerta del Sol is very close to important sights of the capital, such as Plaza Mayor, Plaza de la Villa, Mercado de San Miguel or La Almudena Cathedral, in the heart of Madrid.

The nearest subway station is Sol on lines 1 (light blue), 2 (red) and 3 (yellow). It is also connected to the Renfe Cercanías Madrid network.

You can stroll around Plaza de la Villa if you follow walks 1 or 2 of my ‘Madrid In 9 Walks’ guide.