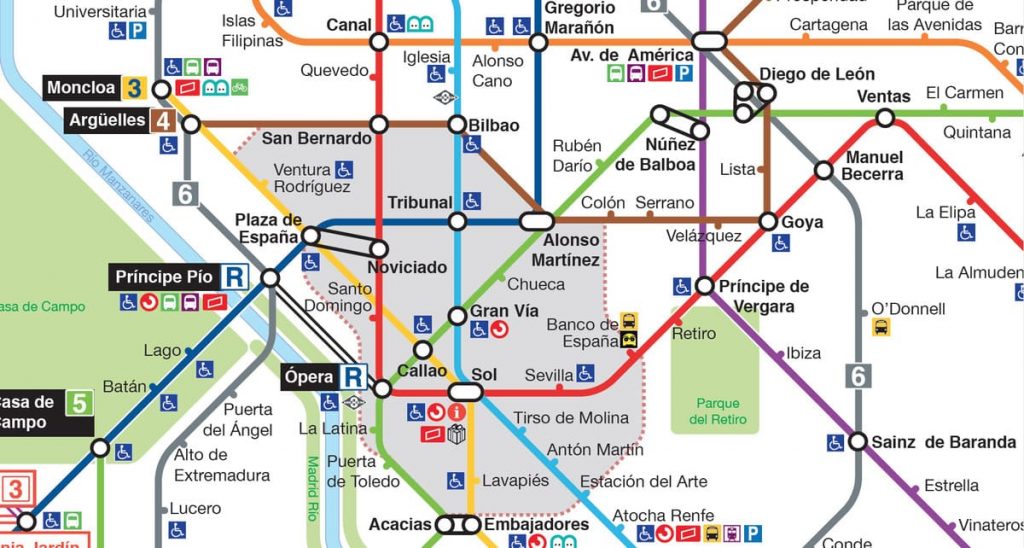 A free Madrid subway map is available at most Metro stations. Go to the ticket office and ask the staff to hand you one. All you have to say is “Un mapa, por favor” (A map, please).

A map is also posted on a big sign of every subway station. It’s perfect because you can always check it on your way in or out.

The subway is the easiest and fastest way to get around Madrid and generally very safe. Since you are likely to use it often, read about the different types of tickets.

Alternatively, you could get a Madrid Tourist Travel Pass.

Obviously, the best option is to download a map. It’s on a PDF format so you can save it in any device and have a look at it later on. It will help you when planning your itineraries and walks.

Alternatively, you can also have a look and download a tourist Metro map where all the main attractions and sights are located.

Ignore the Madrid ​Metro map for judging distances between stations and tourist sights; they aren’t to scale!

How to get directions to ride the Madrid subway

The best site for getting Madrid subway map directions is the official website of Metro de Madrid. For popular attractions, you don’t need to know addresses, just the names will do.

After entering your starting and destination locations, click “Search”. The site retrieves the fastest of all possible combinations. The route is based on the current date and time providing an estimated time for your trip and the number of transfers and stations. You can even click on the print view, convert it to a PDF file and keep it.

My favorite option is to use the Metro de Madrid app. You have the same map directions as on the site, but you can carry them with you on your device.

Or, another great option is to download a favorite of mine: Citymapper. Try it once and you’ll love it inmediately!

Every Metro station has route maps of the system. At the platforms and near every exit is a neighborhood map, a map of the streets and buildings surrounding each subway station. The maps are pictorial and very detailed, so you can see exactly where you will be standing when you emerge from a particular Metro exit stairway.

Have a look at the neighborhood map before you exit the station. You may want to use a different exit stairway so as to be on the sidewalk or the street that suits you best according to your destination.

Additionally, every Metro station access from the street has a big sign with a large map next to it. The information is available in Spanish and English and the signs have built-in illumination so that you can also read the map at night.

What are the best Metro stations in Madrid for sightseeing

This is not a complete list of Metro stations in Madrid, but most of the more famous sights in the city are located near them. If at all possible, stay close to one of these stations.

Metro Alonso Martínez: Close to the nightlife zones of Chueca and Malasaña as well as the chic Barrio Salamanca.

Metro Antón Martín: Half-way between Puerta del Sol and Atocha train station and a short walk from the Reina Sofía museum. One of the best places to stay in Madrid.

Metro Argüelles: Located at a relatively short walk to Plaza España (as well as the party district of Malasaña).

Metro Atocha-Renfe: This is where Madrid’s main train station is (Estación Puerta de Atocha). Don’t confuse it with Metro Atocha that gets you to Calle Atocha, not to the train station!

Metro Bilbao: Close to the cool Malasaña and Lavapiés parts of town.

Metro Banco de España: At the point where two of Madrid’s biggest boulevards – Gran Vía and Paseo del Prado – (nearly) meet, at the point of one of Madrid’s most iconic sights (the Post Office).

Metro Callao: At the heart of Madrid on Gran Via and a short walk from Puerta del Sol.

Metro Chueca: Nominally Madrid’s gay district, but not exclusively so. Close to Gran Vía and Sol.

Metro La Latina: La Latina is one of the most popular districts to visit in Madrid, with a classy (but not prohibitively expensive) vibe.

Metro Lavapiés: A mixture of arty and studenty types and a large immigrant population. Good for interesting nightlife and curry. Close to Atocha train station.

Metro Gran Vía: On Madrid’s most famous boulevard, between the cool districts of Malasaña and Chueca and Puerta del Sol.

Metro Noviciado: In the quieter end of Malasaña and close to Plaza de España and Gran Vía.

Metro Retiro: Get off here to stroll around Madrid’s nicest park, El Retiro, and take pictures of the Puerta de Alcalá.

Metro Tribunal: In the heart of the Malasaña district of town and a short walk to Chueca.

The ‘Madrid In 9 Walks’ guide contains in each walk all the practical information you need to know about the Madrid subway and the Metro stations where each walk starts and ends.