Tipping in Madrid: when and how much? 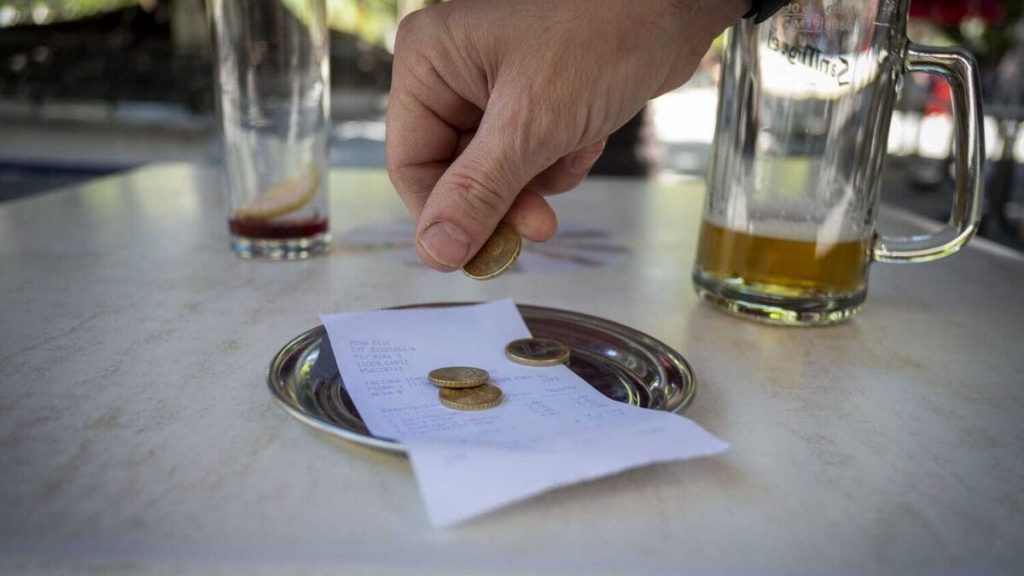 Tipping in Madrid, and in the rest of Spain, is completely different than in other countries, where tipping usually comes mandatory and probably in somewhat significant amount.

For instance, in the USA or Canada you are expected to leave 15-20% of your final bill as a tip, and in the UK a service charge is often added to the bill as standard.

The fact is that there are no hard and fast rules for tipping customs in Madrid, and so the amount you leave is much more likely to be determined by your own judgement.

Since we’re talking about money, these tutorials will come handy:

But how much should you tip in Madrid?

Here’s a practical guide on Spanish tipping culture to help you decide what you should be tipping in Madrid in any given situation.

For this reason, there are very mixed opinions about tipping in Madrid, with no hard and fast rules.

However, you need to know is that the staff in Spanish bars and restaurants are paid a full salary: they aren’t dependent on tips as part of their income. This should take the pressure off tipping because you know the staff will still be able to afford their rent if you decide not to leave a tip!

How much should you tip in Madrid?

As I mentioned previously, Madrileños, in general, are not huge tippers and nobody will expect you to leave a tip.

Tips, are just you saying thank you in the event that you feel the waiter, service provider or establishment has exceeded your expectations. Nothing more.

While US customers leave tips sometimes exceeding 15-20% of the total bill, for most Madrileños this would just be crazy.

As a rule of thumb, if you feel that the service has been particularly good, you may decide to leave the waiter or staff member a tip. This is perfectly fine and it’s a personal choice that you make.

Having said that, your tip should be a maximum of 10% of the bill. Although this tends to be very generous as 5% would be more the norm for most locals.

In any case, keep in mind that you decide the amount of the tip. Nobody else does.

Whenever I travel, I always pay everything with a travel debit card. And I recommend you to do the same. You’ll avoid hidden fees and terrible foreign exchange rates.

Now here comes the dilemma… If you pay for a service with your travel debit card, should you pay the tip in cash or directly with the card?

Both alternatives will be widely accepted in Madrid.

However, I recommend you to tip directly when you pay by card. It’s much easier.

Tipping in restaurants in Madrid

The majority of Madrileños will not tip as many restaurants that provide table service will already factor this in with the addition of a service charge. Look for servicio incluido on the bill.

If it’s not included, it will say something like servicio no incluido (service not included). In this case, you should tip up to 10%.

Additionally, you may be charged an extra fee for sitting outside. To avoid any confusion, ask the waiter if there is a terraza fee. If you leave a tip, make sure you don’t leave your table unattended until the waiter takes it.

Example: If you were having a meal and the bill was 30€, you may want to consider leaving a tip of 1.50€ (which would be 5% of the total). Once again, this would only be if a service charge had not already been added.

Tipping in cafés and bars

The general rule of thumb for tipping in Madrid is that if you are ordering a pre-prepared meal, takeaway, or light snack, there is no need to tip the server.

If you’re eating at a tapas bar, then rounding up to the nearest euro (and sometimes adding another euro on top) could be the way to go. Similarly, if you’re just out for a few drinks, tipping the bartender is not necessary, but if you insist, round up the bill to the nearest euro.

Example: If you had a couple of coffees in a street café and your bill came to 5€, you could decide to leave a few extra coins with your bill.

However, if they have been particularly helpful in for example giving you directions or helping to carry your luggage you may want to give them a little extra by rounding up the fare by 1-2€.

Example: After a short ride, never leave a tip. Even if you go from the airport to your accommodation and the ride costs 30€, don’t tip the driver either – you’ve already paid enough!

Again, who you tip, and how much, is ultimately at your discretion, and should be based on the levels of service you receive.

And this applies to all the hotel staff (e.g. housekeepers, maids, concierge, porters, etc.). Every single one of them can be eligible for a tip if you feel their service has exceeded your expectations.

For example, you go to a 5-star hotel where a porter helps you with your luggage, you could give him 1€ per bag. In similar fashion, if the concierge has provided a quality service a 5-10€ would be more than enough.

For housekeeping or maids, you could provide a 3-5€ tip at the end of your stay.

Many tour guides in Madrid work as freelancers, so will appreciate a tip after a day of showing you the sights. Around 5-10€ per person for a full day of sightseeing is about average.

There’s no need to tip tour guides in museums and galleries as they’re paid by the government. But a gracias and a smile will surely brighten up their day.

And please, please don’t take one of the ubiquitous free tours that make their way through the streets of Madrid.

Example: You book a 120€ privately contracted guide for a tour of the Prado and you like the guide so much for her explanations and enthusiasm that you tip her anywhere from 5 to 20€.

Tipping other services in Madrid

If you’re staying in a self-catering apartment, and need your groceries delivered, it’s considerate to tip 1-2€.

At the hairdressers? You could leave 2€ if you were given an amazing level of service that went beyond the call of duty – for example if you don’t speak Spanish and the hairdresser really made an effort to understand you and what you needed done. It’s similar for beauticians and spas for treatments. You would leave 1-2€ if you wish but it’s not expected.

Remember, tipping in Madrid is entirely optional, but can be done – and indeed is often done – if service is good.

If you don’t tip and some staff member feels that they deserve a tip, there is no need to feel obliged. It’s your choice, not his.