Traveling to Madrid by car 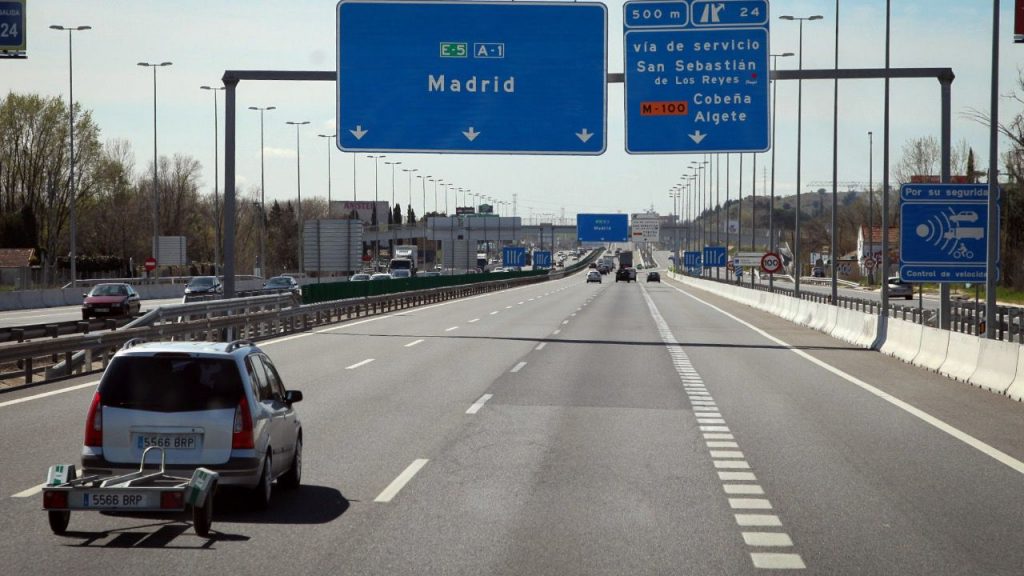 You may be considering travel to Madrid by car as part of a road trip around Spain. Cool! It’s a fun and independent way of seeing the country.

If that’s your plan,have a look at a complete guide on where to book your rental car online.

But first, let’s see how you can get to Madrid. Then, how it is to drive around Madrid…

Getting to Madrid by car: highway network

As the capital of Spain, Madrid is the central hub to which all roads lead. In fact, there’s a plaque in Puerta del Sol indicating the center (km 0 or kilometer zero) of the radial network of Spanish road.

Being located in the center of the country, Madrid is not more than 6-7 hours driving from the furthest Spanish town (except those outside the Iberian Peninsula, of course).

1. Free to use highways

The main highways (autovía) linking Madrid to other important cities are:

The the radiales (R-2, R-3, R-4, R-5) are interurban highways complementary to the old radial autovías departing from Madrid. There are tolled highways forming a new system of accesses to the capital that merges with their autovía counterparts far from Madrid.

The main advantage to these roads is that they allow true fast travel from the first kilometer, while the free to use highways near Madrid (among the oldest autovía stretches in Spain) frequently go through populations, have constant entries and exits and suffer several other conditions which both jam them and make their first kilometers limited to speeds well under the normal 120 km/h (75 mph) limit.

You should definitely take these roads especially if you’re traveling on days when traffic jams are expected like Friday and Sunday afternoon, the start of the summer holiday or long bank holiday weekends when many Madrileños head elsewhere for a short break.

These 3 main ring roads allow you to travel to different parts of the city without having to cross through the middle of it.

Furthermore given Madrid’s geographical position in the center of the country you’ll take these highways in order to travel between different cities without having to cross it (from Barcelona to Seville for example).

Unfortunately, driving on these highways can be stressful because of the high volume of traffic.

Driving along the M-30

Don’t count on an easy drive along the M-30.

This beltway is now almost inside the city given that the city has spread outwards since the ring road was built. And this comes with some difficulties:

Bear in mind that during the morning and afternoon rush hours the circulation on these roads can collapse for any reason like an accident, road works, bad weather…

The best piece of advice that I can give you is to allow plenty of extra time for your journey if you’re planning to drive on one of these roads. There are often problems around Alcobendas, Boadilla del Monte, Alcordón or Leganés in the morning rush hour and at other points where there are companies with a large workforce.

Here’s some advice on driving within the city itself.

Like in any other major Spanish cities, drivers can get very impatient, don’t tolerate cautious (or lost) drivers very well and and will protest loudly when behind a slow or unsure driver. Unfortunately, most Spanish drivers can (and do) use their horn at their will and sometimes very aggressively.

Some basic directions inside Madrid

The Paseo de la Castellana is the main axis as it crosses the city from North to South. Further South, it becomes the Paseo del Prado and later the Paseo de las Delicias. But it’s always the same avenue.

Some important streets in Madrid run parallel to the Paseo de la Castellana. These are:

Conversely, some important street run perpendicular to the Paseo de la Castellana. These are:

The center of the Madrid is now called Madrid Central. Please make sure you know about the current restrictions to avoid fines.

This article is part of a complete tutorial about car rental in Madrid where you can read all the information you need to organize your road trip around the country.

1. Traveling to Madrid by car
2. How to book your rental car online
3. How to find cheap rental rates?
4. Do you need an International Driver’s Licence?
5. Getting around Madrid: rental car
6. 6 tips for driving in Madrid
7. Car parking in Madrid