How is the weather? Madrid has a great climate 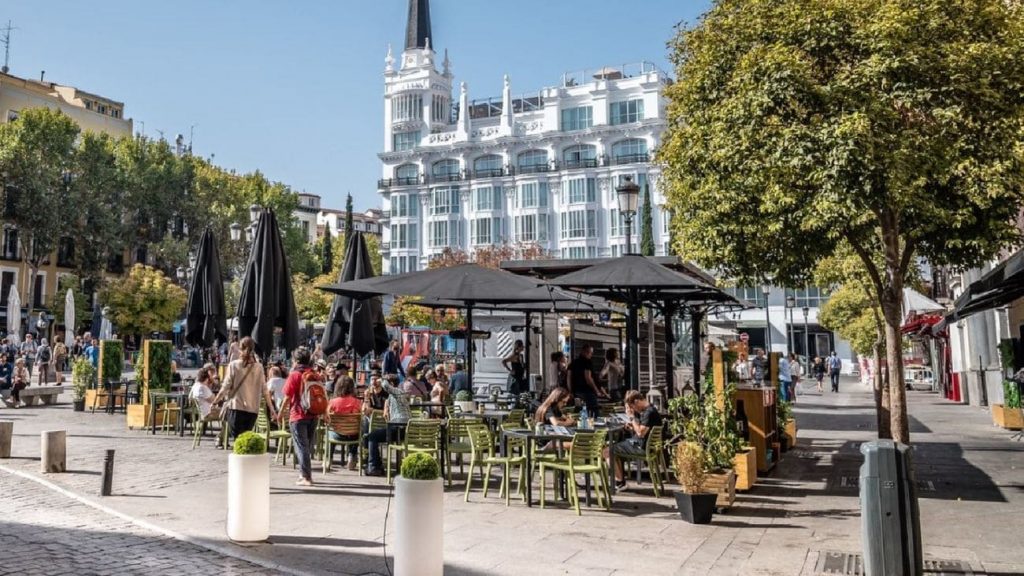 In terms of weather, Madrid enjoys an amazing climate. Spring and fall are the best time of the year to spend your holidays in Spain. During both seasons you’ll find extremely sunny days along with fantastic temperatures.

No matter what season it is or the weather at the time, Madrid has the perfect climate for you. With more than six months of mild temperatures and sunny days, the city is an attractive destination for your next holidays in Spain.

Madrid sunny days are waiting for you

The city is located in the center of Spain, on a high plateau and thanks to this it enjoys a very dry climate. There is little rainfall (sometimes in the spring and autumn), and you’ll mostly catch blue skies during the winter. In fact, Madrid is one of Europe’s sunniest locations, with between 2000-3000 sunshine hours recorded each year – more than double compared to northern Europe. Madrid’s summers are particularly sunny, hot and dry.

It is one of the healthiest in Europe due to its close proximity to the mountains of the Somosierra (to the north and north-east), and Guadarrama (north-east) and Toledo (south and east). Pure air flows into the city from almost all sides.

If you want to visit Spain, you should take a look at the weather forecast for Madrid.

Spring is fabulous for a Madrid holiday!

Madrid is at its best in the spring, even though you will risk getting some rainfall during March, April and even May.

March and April bring temperatures of around 12ºC (54ºF), and while March is unpredictable in terms of rain, April is almost guaranteed to suffer from precipitations.

In May the temperature is about 21ºC (70ºF) and you’ll start seeing the city’s outdoors café terraces being laid out, and getting busier, as you approach June. Be warned though; if March and April are unusually dry, May will get the showers instead.

Madrid vacation: going in the summer

Similarly to the central area of Spain, Madrid weather makes extremely hot and fairly dry summers (months may pass before you see a raindrop). Temperatures can be higher than 40ºC (104ºF), sometimes reaching 45ºC (113ºF) or more…

If you still don’t mind and decide to travel here in July or August, you will find a very empty place. In a way, it’s nice to escape from the tourist hordes and you may even think “Awesome! I’ll get rid of a zillion other tourists”. So if you like to have the city to yourself, then this period of the year may be the time for you to visit.

It’s true: you’ll definitely won’t see them because of the heat Madrid can be unbearable.

That’s why it is very important to follow these tips to keep cool during a boiling summer. Trust me it can get really HOT over here!

Fall, when Madrid is at its best

Fall in Madrid is pleasant and very mild. September days can still get some summer heat, especially early in the month, but nighttime temperatures drop quite rapidly as soon as August is over.

At the end of October and especially during November, you’ll again experience some of Madrid’s rare rainfall, and as November turns to December, the rains may continue as the temperatures drop drastically.

Temperatures from late September to early December go from about 16ºC (60ºF) to 7ºC (45ºF). Having said this, if there is sunshine and as long as it’s dry, you’ll still be able to enjoy daytime coffees outside and lay on the grass in one of Madrid’s many parks.

Madrid in winter is not cold

Though cold, winter in Madrid is usually quite dry, and for those not looking for sun-tanning weather it can be a very refreshing time of the year to visit the city. It occassionally snows in the center, but it rarely accumulates.

While there is certainly no shortage of activity in the city, there are far less tourists than at other times of the year, resulting in smaller crowds at museums and other tourist centers, off-season rates at hotels etc.

It is worth keeping in mind that the temperatures at night can go well below zero so make sure you get a room with proper heating.

When is the best time to go?

The best time to go to Madrid is either spring (March to June) or fall (September and October) when days are longer and temperatures are not insanely high.

From the last weekend of March till late October, the summer daylight saving time is applied. Hence, the time is shifted forward by one hour and 2 hours ahead of Universal Time Coordinated (UTC+2) also known as Greenwich Mean Time (GMT+2). In June, you can watch the sunset as late as 22:00… which is pretty cool!

Avoid certain holidays and peak season. On holidays most attractions and shops will be closed. During peak season Madrid receives more visitors and prices (particularly lodging) can be higher.

During early fall, the light is absolutely perfect. After the summer break when everyone escapes to the beach, Madrid comes back to life little by little. People return to the street as temperatures drop slowly, taking advantage of the last sunny days before the rain starts again.