Riding a bike: Madrid is not a bicycle-friendly city 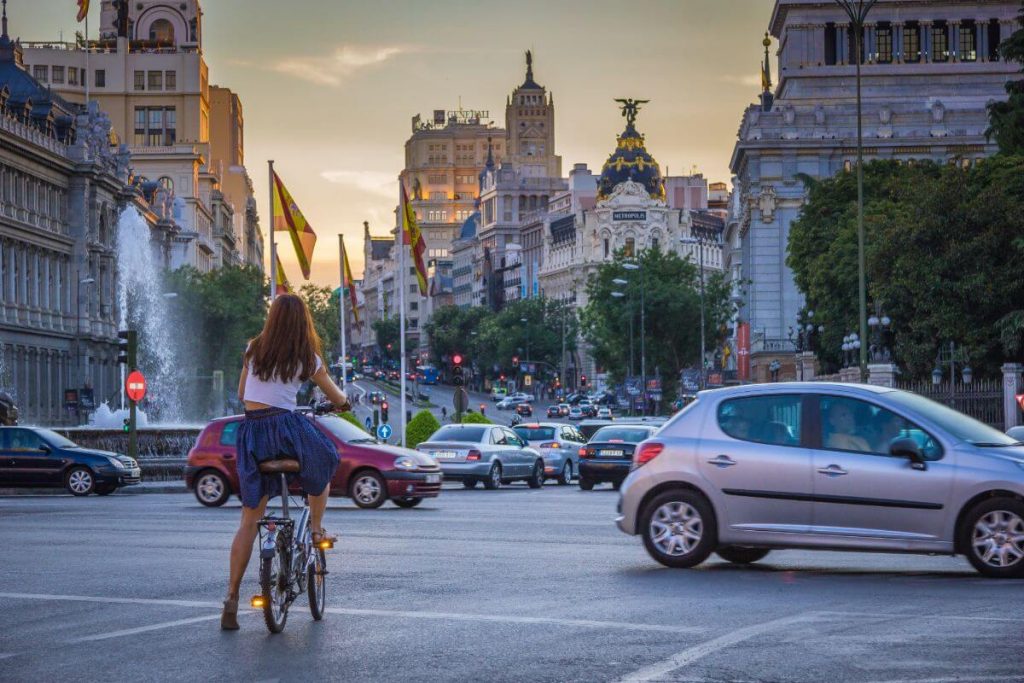 Are you considering riding a bike? Madrid, unlike many other cities in Spain, is not bike friendly. It has few cycle paths and it’s a city made for cars – not for bicycles or pedestrians like Seville or Barcelona.

As a matter of fact, upon arriving in Madrid you won’t be seeing a lot of Madrileños riding bikes everywhere… Unfortunately, only a small minority here rides a bike.

Anyone who has lived, visited, or cycled in Madrid knows that being a cyclist in the capital city can be a dangerous existence.

That’s why it’s probably not a good idea to explore the city by bike.

If you’re still determined to explore Madrid on your own riding a bike, you can benefit from the citywide bike rental scheme called BiciMAD. Alternatively, you can also rent your own bike.

If you want to sightsee by bike, the best idea is to go with one of the companies that organize guided bicycle tours. An experienced guide will take you along safe and scenic routes, away from the traffic.

Riding a bike: Madrid is not a cycling paradise

Biking in Madrid is possible, but you have to be a seasoned cyclist.

Because Madrid is a city made for cars and bikes are formally considered vehicles, which means you have to obey all the same traffic laws as a car. The fine is 200€ if you get caught running a light, 120€ for running a stop sign.

This means also that you can ride pretty much anywhere:

Keep in mind the main avenues and streets are busy and as a cyclist, you feel quite exposed to the traffic around you. On top of it, taxi and bus drivers find cyclists particularly annoying.

However, only a small number of serious bike accidents actually occur. Be smart: wear a helmet (even if it’s not required by law) at all times and make sure to get a travel and health insurance before your trip.

You’ll recognize the priority bike lanes thanks to their 30km with a bike logo. When you’re in them you have the right of way, but if it’s possible and safe, hang to the right so cars can pass with more room. You don’t have to, but it’s polite.

Unfortunately, they usually just end in the middle of nowhere, or suddenly jump over to a different lane with no warning, or let you out into a four-lane roundabout. Some cars pretty much ignore them.

You can’t ride your bike in these lanes. Anyway, it’s dangerous. So just don’t do it.

Stick to the far right lane (without going into the taxi-bus lane) and try to occupy the entire lane so that other vehicles don’t try to split the lane with you.

They may occasionally honk, but you have every right to be there. If you’re feeling polite you can pull further right and let them pass, but this you have no obligation at all.

If you enter one of them, try to ride with traffic at all times, or else dismount and walk your bike. The police have started to fine cyclists going the wrong way recently, so be very careful.

It’s illegal to ride on the sidewalks, so do it sparingly or not at all.

Don’t ride down the mall-like part of Calle Fuencarral, Calle Montera, or any other pedestrian walkway unless you’re going very slowly or walking your bike. It’s illegal and you can get an expensive fine. Usually there’s a good parallel route, so try to find it using your smartphone.

Roundabouts in Madrid are generally dangerous. Some are five lanes wide and nobody seems to follow the rules, so try to avoid them at all costs.

If you feel unsafe approaching a roundabout, walk your bike on the sidewalk.

If you have time and feel safe, you should weave to the front of the cars for both a better position when the light turns green and for visibility reasons. This move is perfectly legal and sometimes there is even a designated space for bikes and scooters in front of the traffic.

Be careful though, and watch out for pedestrians and cab doors that might swing open.

Riding a bike: Madrid is not flat (at all)

Bad news: Madrid has hills. These slopes pretty much rule out anything as heavy as a cruiser.

Here you have a list of the steepest ones. Good luck climbing them without an electric bike!

Going up from Príncipe Pío on the side, the street opens up to make room for 2 more lanes coming from the central tunnel. A small break in the middle of the route leads you through the hardest slopes of the street, towards Plaza de España. Once we pass under the bridge, the slope then is a bit less steeper, allowing you to get to the top with relative ease.

Watch out for: Traffic. Very abundant and impatient. In Plaza España the traffic jam is guaranteed almost 24/7.

It’s a long, hard and beautiful climb through one of the most beautiful areas of Madrid.

A gentle start, turns into a complicated ride with very considerable slopes to reach the end of the Parque de Atenas and that will be constant until almost the end. Once you go through the intersection with the Cuesta de la Vega, the street narrows down to 2 lanes that take you under the viaduct. Then, it narrows down to just one lane, taking you around the Madrid de los Austrias, to Puerta Cerrada.

Be careful with: Dosing the effort during the ride. It’s the key to get to the top on the bike.

An alternative to the dreaded Calle Segovia, it’s as hard as beautiful. Think of a Tour de France stage for a few minutes.

It starts with a single lane that winds through parks, with a first 180º turn that lifts you out of the saddle and keeps you pedaling standing practically until the end of the street. When you reach the viaduct, it turns right and climbs upwards for an endless 200m straight. Catch your breath at the traffic lights.

Watch out for: Parked cars.

From the corner of Paseo del Prado, take Calle Atocha. The first few meters are the flat until the first slopes appear, which will be the hardest of the route until you reach Antón Martín.

In this stretch, the traffic is crazy; trucks in double file and cars stopped to turn left. The traffic is not very fluid, which gives you an advantage with respect to the other vehicles.

From Antón Martín to Jacinto Benavente, the slope is gentle and pleasant, but you’ll have to be ready for some honking, as cars are forced to go behind us in the priority bike lane or invade the bus lane to overtake you. And they don’t like that at all.

This long and steep slope links Legazpi with Atocha, and is the best alternative, if not the only one, to go up from Madrid Río to the center. I recommend you to follow a gentle and steady pace to overcome without major problems. It has 6 lanes only uphill and cars usually don’t invade your cycling space.

Watch out for: Left turns, as you will have to cross all 6 lanes to be able to turn, although if you don’t see it clear, you can always wait at a pedestrian traffic light to do so.

The first stretch, up to the Plaza de Mariano de Cavia is difficult – very steep, quite a lot of traffic, double parked cars and tarmac in bad condition.

The second stretch, up to the Hospital del Niño Jesus, is a gentle climb that you can easily do following the priority bike lane. From there to Calle O’Donnell, it’s practically flat and you’ll only have to worry about the bumpy tarmac and double parked cars.

Be careful with: Pedestrians in the area. Being next to the Retiro, there are usually a lot of them, who sometimes cross without using the traffic lights.

The most difficult section of this long street is the one that goes from the Santa María de la Cabeza traffic circle to Plaza de Cascorro. The first part has 4 quite steep lanes in each direction until you reach Glorieta de Embajadores. Once you pass the roundabout, a single cobblestone lane continues up, through the neighborhood of Lavapiés, up to the top, next to the Rastro flea market top area.

Watch out for: The cobblestones and pedestrians in the Lavapiés area. They make the considerable slope even more difficult.

This article is part of a complete tutorial about exploring Madrid on bike where you can read all the information you need to enjoy the city on a bicycle.