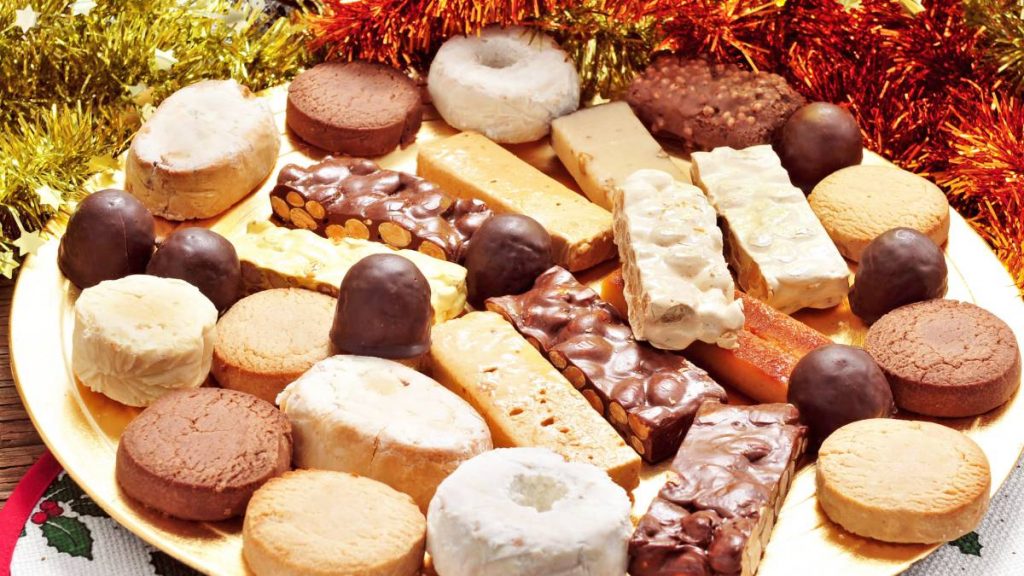 The arrival of Spanish Christmas sweets to the window shops means that Christmas has officially arrived in Spain!

Spain, like every country, has their very own traditional sweets for Christmas that people eat around this time of year. If you are in Spain around Christmas time, you absolutely must check out these traditional and delicious sweets!

With so much variety to choose from, why not give in to your sweet tooth and try out these delicious options?

Here are just a few of my favorite Spanish Christmas sweets!

Turrón is an almond-based Christmas sweet whose roots apparently stretch back to the 15th century, drawing from Arab and Berber confectionery tradition.

This homemade Spanish candy bar is a type of nougat usually shaped into a rectangular tablet.

Made with honey, egg whites and pine nuts or almonds, traditional turrón varieties are Jijona (popularly known as blando, soft) and Alicante (also known as duro or hard). However, the range of varieties is endless nowadays.

My favorite is the crunchy sweet turrón duro that goes perfectly with your morning coffee or tea.

Where to buy the best turrón in Madrid:

Rather than a chewy, soft paste, this turrón is unyielding at first, then dry and crumbly between the teeth, finally dissolving away on the tongue like sugary peanut butter.

It’s made of whole roasted almonds, bound together in an opaque, cream-colored, hard candy matrix made from some combination of orange-blossom honey, sugar, glucose syrup, and egg whites.

It may or may not be finished with a neutral-tasting starch wafer on the outside to stop it from sticking to everything.

Turrón de Guirlache is made of straight-up almond brittles, with the egg white omitted and the sugar and honey caramelized more aggressively.

Mazapán (or marzipan in English) are animal shaped sugary confections made mostly of almonds, sugar, honey and eggs. Once this very sweet dough is made, it’s then molded into different shapes and baked.

It seems that the origin of marzipan is found in Spain, specifically in Toledo, where in fact it’s so extremely popular as common.

Several historians point to the nuns of the convent of San Clemente in Toledo as the creators of this wonderful sweet during a terrible time of famine that lashed Castilla after the battle of the Navas de Tolosa, back in 1212.

According to certain chronicles, at that time there was no wheat in the city, but the pantries were full of almonds and sugar. So, the nuns decided to make a kind of almond paste with sugar, and feed the hungry in the area with it.

Usually eaten to celebrate the New Year, mazapán is not a favorite among children. Its mild bitter taste puts a toothy grin on their faces!

Where to buy the best mazapán in Madrid:

The king of Spanish Christmas sweets is present in every home on January 6th, when celebrating the Three Kings Day. Most people like to dip it in hot chocolate, but you can also have with a coffee or any other hot drink.

Few can resist until the 6th to eat it. So, you can find it in bakeries even two weeks earlier.

The roscón de Reyes is a ring-shaped cake (much like a giant, elongated doughnut) that is said to symbolize a crown that the Three Kings (also known as Wise Men) wore. The cake is made from a sweet dough that gets its characteristic flavor from orange water, and it’s topped with sugar and candied fruits. It may or may not have filling, which can be whipped cream or truffle.

But the truth is that, more than a sweet, the roscón is an event. There’s a little tradition that goes along with it too!

Inside each roscón de Reyes is a small, hidden objects – usually a small figurine. The person who takes a bite and finds the figurine will pay for the roscón. So you’ll notice that when choosing their piece everyone looks closely and makes bets on where it will be found, each with their techniques.

It’s much funnier to enjoy eating your roscón with family and friends!

Where to buy the best roscón de Reyes in Madrid:

One of the most typical Spanish Christmas sweets is the mantecado.

The mantecado is one of Andalucía’s most typical Christmas sweets, which first appeared in the bakeries of Antequera (Málaga) or Estepa (Seville), nobody knows for sure. Its curious origins are related to the excess of cereals and piglet lard during the 16th century. That’s why its name mantecado comes from the word manteca, which means “lard” in Spanish.

This square-shaped sweet is made of wheat flour, lard, sugar and egg white. It’s later flavored with either cinnamon, almond, chocolate or lemon, among others. However, you can find some vegetarian mantecados made with old olive oil.

Mantecados, crumble very easily. In fact, they are so soft and light in texture, they will literally melt in your mouth – words will not do them justice. You’ll have to make them to see why they are a Spanish favorite and realize why no home is without mantecados at Christmas.

Where to buy the best mantecados in Madrid:

A variety of the mantecado is the round-shaped polvorón, which, however, has much more flour, it lacks egg white, and it always has almonds inside, in contrast with the mantecado.

Unsurprisingly, its name comes from the excess of flour, which make it seem like it’s covered in dust or “polvo“, the Spanish word for powder.

Just like mantecados, polvorones are traditionally from Andalucía, where they are most common, but you can find them throughout Spain during Christmas time.

So polvorones are a type of shortbread cookie that are soft and flakey and are popular during the holidays. These typical Spanish Christmas sweets can be found in different flavors, like cinnamon, lemon, and chocolate.

Where to buy the best polvorones in Madrid:

This article is part of a complete tutorial about Christmas in Madrid where you can read all the information you need to enjoy the best Christmas holidays in Madrid.