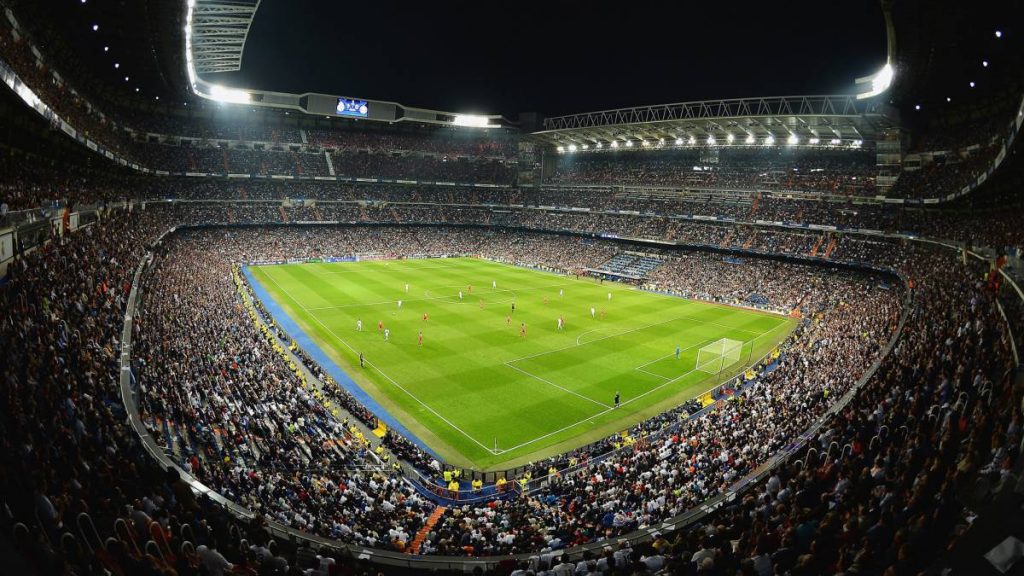 The Santiago Bernabéu is the Real Madrid Club de Fútbol stadium, and it hosts the matches of one of the city’s football clubs.

The history behind the Estadio Santiago Bernabéu

The Real Madrid CF, also known as Madrid, was founded in 1902 and it is one of the most important sport symbols of Madrid. Because of the city’s other club and main rival, the Club Atlético de Madrid, the city is basically divided in half between Madrid and Atlético fans.

Real Madrid CF supporters are popularly known as ‘Merengues’. You’ll hear them shout songs and chants as soon as you enter the premises. The atmosphere is specially impressive if this is your first time attending a football match.

Don’t miss the areas located behind the goals. The ‘Vikingos’ are always located at the fondo norte, while the ‘Ultra Sur’ are on the opposite side. Both groups always have the initiative when supporting and singing. From time to time, they organize mosaics if the match is a special occasion.

How to buy Real Madrid tickets

The easiest way to get your Real Madrid tickets is buying them online.

1. First, have a look at the official calendar of matches and check the dates when Real Madrid CF play home. Please bear in mind that the final date and time of the match are confirmed only a few days before.

Note that the match generally takes place on a Saturday or Sunday, although La Liga also takes place on Fridays and Mondays. It’s rare but matches can sometimes take place other days of the week due to calendar restrictions.

2. Then, choose the area of the Santiago Bernabéu where you would like to seat. Don’t worry, it’s easy looking at the seating chart.

3. Finally, once you have selected the match and the seat area, purchase it. Avoid the waiting lines and book your tickets now!

How to get to the Santiago Bernabéu stadium

The stadium is located in the Chamartín neighborhood, a residential area relatively far away from Madrid’s city center.

You can get there by

The ‘Bernabéu Tour’ walks you through the most emblematic areas of the Santiago Bernabéu stadium. Visit the trophy room, the home team changing room, the press room, and the players’ tunnel. Additionally, you can access to different areas of the stadium, including the field grass.

The tour is self-guided and includes: a panoramic view, the Best Club in History room, the Sensations Room, the pitch, the presidential box, the dugouts and technical area, the players’ tunnel, the dressing rooms, the press room and the club’s official store.

As soon as you enter the premises you will feel like a true Real Madrid CF player!

On match days, tours are available until 5 hours before the beginning of the game. After that time and until 3 hours and a half before kick-off, it will only be possible to visit Best Club in History room, the Trophy Exhibition room and the panoramic view of the stadium.